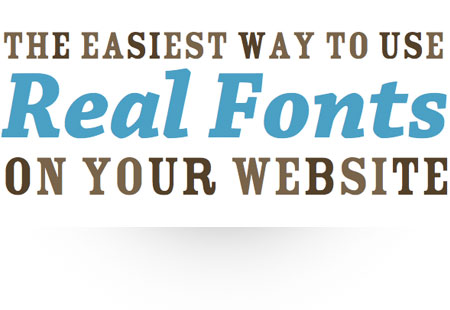 Irritated by Arial? Tired of Times New Roman? Then read on… web fonts just got prettier.

For as long as the internet has been around designers have been limited to just a small selection of fonts that can be used in the creative design of a website. And that’s because in the mid-1990s, Microsoft defined some ‘Core Fonts’ for the internet – which included a dazzling selection of about a dozen typefaces such as Arial, Times New Roman, Georgia and Comic Sans! These Core Fonts were shipped with operating systems from Microsoft and Apple, and in time became known as ‘web fonts’.

Over the years, nearly all websites have used the same, limited selection of typefaces. And there’s a good reason for this. From a technical aspect, a website needs to link to fonts stored locally on your PC to render text on a web page. And because the only fonts that can be guaranteed to be on a PC are the ‘Core Fonts’ the logic goes that a website has to be designed with these fonts in mind.

Because recently all mainstream web browsers have been developed to link to fonts that are stored remotely on a web server rather than relying on the ones that you had shipped with your PC. Designers can now specify fonts from a huge selection of faces from Proxima Nova to Bad Dog; in fact there are literally 1,000s of fonts that can be used on your website, all without sacrificing any web standards – plus they’re fully compatible with your CMS, search engines and screen readers.

And the advantage? Well for certain, a unique font will make your website look quite different from the mainstream (unless of course you really like Arial!). And don’t forget, many brands have supporting typefaces – which means you can now specify the right font for your website rather than choosing one that ‘looks a bit like it’. Choosing a custom font also means that you can create difference and emphasis to make certain text stand out – so perfect for headlines, special offers and calls to action.

WiseTiger is currently rolling out some new websites using Typekit Fonts, and we’re very impressed. In development are sites for Aviation Software Company Damarel and The Fownes Hotel. And recently ‘live’ is a website for Auto Industry Insider — check the use of the fonts used for the headlines on this website which are all displayed in a font called ‘Museo’. Typekit can also be incorporated into existing websites, so chat with us if you think this could be of interest to you.

Is social media right for business? →